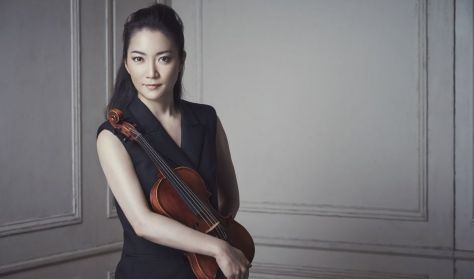 19th century Slavic music has a special place in fundamentally German-centric musical history. National awakening also produced unforgettable compositions in Bohemia and Russia. The program of this concert, seasoned with intrigue, love, sensuality and jokes, is built around tales by three composers: Smetana, who turned from German aristocracy to the Czech countryside, Tchaikovsky, who combined musical elements from Western Europe and Russia with an exceptional skill, and Rimsky-Korsakov, who is acclaimed as a pioneer of Russian national music. All this with the solo of Japanese violinist Akiko Suwanai, the youngest ever winner of the International Tchaikovsky Competition, who recorded a CD with the BFO in 2001, and who was praised by The Times for her “noble playing, with its rhythmic life, taut and rigorous”.

The overture beginning the program is Smetana’s second most popular piece following The Moldau. As opposed to other composers, for example Rossini, who wrote their overtures at the very end of completing their operas, the overture to The Bartered Bribe had already been composed before the opera’s libretto was written, preceding its composition by two years. Although Smetana’s second opera, a comedy about lovers preventing an arranged marriage through a clever trick, was premiered in Prague in 1866, its final version was completed only in 1870. The overture built on the themes of the finale and the scene of selling the bride begins with a short fanfare followed by a folksy dance melody conjuring up the Czech village where the plot takes place.

After his suicide attempt, Tchaikovsky withdrew to Clarens to escape from his failed marriage – and composed wonderful pieces on the shores of Lake Geneva. He wrote his violin concerto in 1878, within a few weeks, and polished it to perfection following the advice of his student and friend, violinist Iosif Kotek. Although its dedicatee, Lipót Auer decided that it was unplayable, the concerto is now one of the most often played works in its genre. The opening movement with its rather generous melody alternately displays lyrical pas-de-deux and grandiose forces. Following the subtly arranged and elaborated, laid-back slow movement, the rustic Slavonic-sounding rondo finale explodes without a break.

Between the title and opus number of the only still popular piece of Rimsky-Korsakov, a member of The Russian Five, the following description is added: “Symphonic Suite After The Arabian Nights”. This makes it even more obvious that the program of the composition is based on the Arabian collection of tales. Scheherazade (solo violin) escapes death by entertaining for one thousand and one nights the Sultan Schariar (trombones and tuba), who has executed each of his wives, one after the other. The composer set four tales to music in 1888, describing the characters with apposite orchestration: Sindbad (cello), Kalandar (bassoon), the love story of the Young Prince and the Young Princess (two violins) and the story of a festival in Baghdad.